Anonymous donations of valuable gold coins — including one recovered from a 300-year-old shipwreck — made the 2016 holiday season bright for Salvation Army chapters from Florida to Oregon. 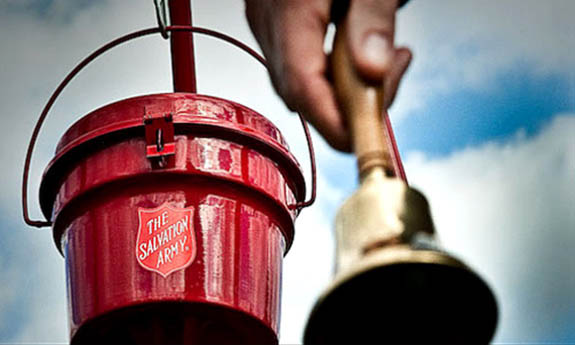 The Salvation Army’s bell ringing season starts each November and runs through Christmas Eve. Most of the donations come in the form of pocket change and paper money, but this year a bunch of benefactors generously dropped gold coins into the iconic red kettles. 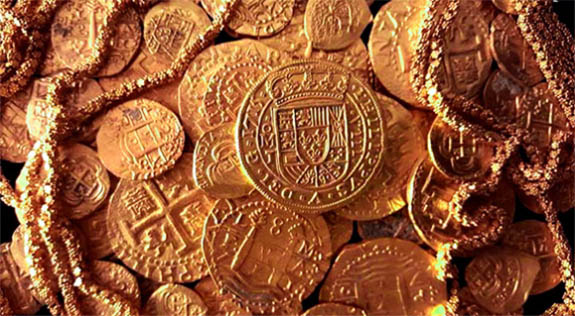 In Sebastian, Fla., an anonymous donor decided to hand his coin donation to veteran bell ringer Jim Bessy. The 300-year-old gold escudo, which is said to be worth several thousand dollars, had been recovered from the wrecks of the Spanish treasure ships known as the 1715 Plate Fleet. The donor didn't want to drop the gold escudo into the kettle because he feared it would get mixed in with the other loose coins. 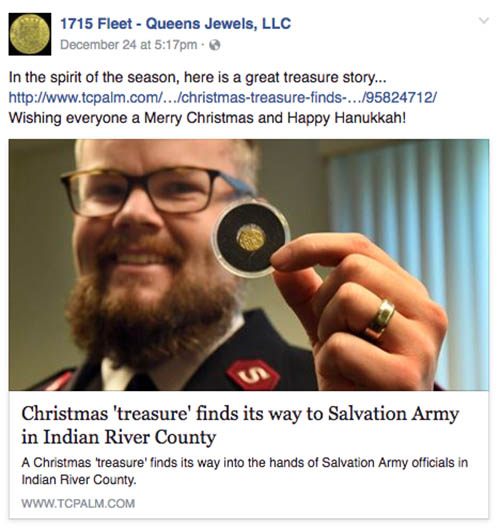 The coin, which was recovered off the Florida coast and encased in plastic with the label “1715 Fleet 1 Escudo,” will benefit the operations of the Salvation Army chapter in Vero Beach.

“This coin will help bring light on so many stories of families in need right here in Indian River County,” Salvation Army Lt. Jay Needham told USA Today. “With this great contribution and so many more from around this generous community, we are able to help people that are in need during the Christmas season and into the New Year."

In past years, we've written about anonymous benefactors dropping diamond and gold jewelry into the Salvation Army kettles during the Christmas season. This year, the most surprising donations were in the form of 1-ounce gold coins worth about $1,200 apiece. Here's the rundown, as compiled by USA Today...

• In Colorado, a pair of 1-ounce South African gold Krugerrands were found in red kettles in Fort Collins. Salvation Army Capt. Isaias Braga told USA Today that in years past an anonymous gold coin donor always returned to The Salvation Army to buy back the item at $1,000 more than its value.

• In Kentucky, Salvation Army officials discovered a 1-ounce South African gold Krugerrand in a red kettle at a Louisville Walmart.

The Salvation Army red kettle program can track its origins to 1891, when Salvation Army Captain Joseph McFee was distraught because so many poor individuals in San Francisco were going hungry. During the holiday season, he resolved to provide a free Christmas dinner for the destitute and poverty-stricken. He only had one major hurdle to overcome — funding the project.

According to The Salvation Army's official website, McFee's red kettle idea was inspired by his days as a sailor in Liverpool, England. There, he remembered an iron kettle called "Simpson's Pot" into which passers-by tossed a coin or two to help the poor.

The next day McFee placed a similar pot at the Oakland Ferry Landing at the foot of Market Street. Beside the pot, he placed a sign that read, "Keep the Pot Boiling." He soon had the money to see that the needy people were properly fed at Christmas.