A metal-detector enthusiast in Cambridgeshire, England, has unearthed a spectacular 3,000-year-old torc made from 1.6 pounds of twisted and burnished 20-karat gold. Measuring nearly 50 inches around, the beautifully preserved golden torc is the largest ever found in the UK. 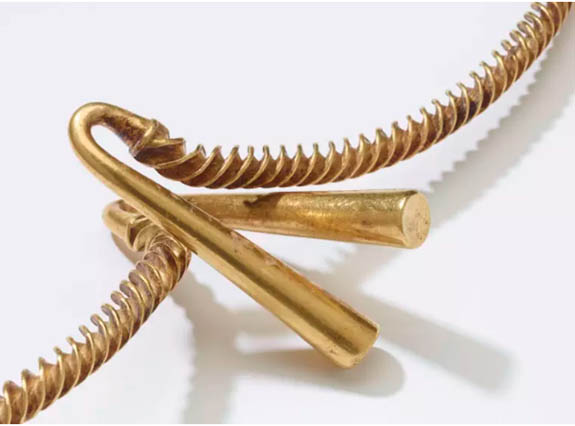 Historically, a torc was worn as a neck-ring with the opening in the front, but the massive Bronze Age specimen pulled from a site 60 miles north of London was likely worn a different way, according to the British Museum's Bronze Age curator, Neil Wilkin.

Wilkin said the torc displayed "unprecedented" craftsmanship and may have been worn around the waist by a pregnant woman during a fertility ritual. Others believe it was worn as a sash, over thick winter clothing or by a prized goat or sheep in the course of a sacrifice.

The golden torc was found by an anonymous treasure hunter walking with his metal detector over a freshly plowed field.

The extraordinary torc was revealed at London's British Museum on the day the Portable Antiquities Scheme and Treasure (PAS) delivered its annual report about the number of finds made by the public. PAS, which is managed by the museum, cataloged 82,272 discoveries made in the UK during 2015. Of that number, more than 1,000 were considered "treasure" because they were gold, silver or prehistoric metalwork. Since 1997, the number of artifacts recorded by the PAS has grown to more than 1.2 million.

The UK's Treasure Act 1996 states that finders have a legal obligation to report all potential treasure to the local coroner in the district where the find was made. The Act allows a national or local museum to acquire the treasure for the public's benefit and pay a reward, which is usually shared equally between the finder and landowner. The value of the golden torc has yet to be determined.

The area in which the torc was discovered is famous for being a hotbed of archaeological finds from the Stone Age, Bronze Age and Iron Age. Cambridgeshire is one of the earliest-known Neolithic permanent settlements in the United Kingdom. The Neolithic period began in 10,200 BC and ended between 4,500 BC and 2,000 BC.

While the 3,000-year-old torc has a priceless historical value, its metal content alone is worth $25,585 at today's gold price.