Welcome to Music Friday when we celebrate classic songs with jewelry, gemstones or precious metals in the title or lyrics. Today the late, great Jim Croce sings about a giant man with an affection for diamond jewelry in his 1973 chart topper, "Bad, Bad Leroy Brown." 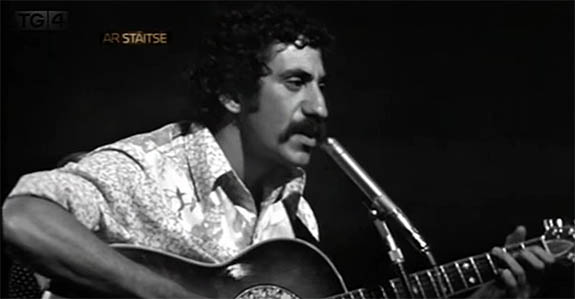 In this song inspired by a friend he met while working as a lineman for the U.S. National Guard, Croce tells the fateful story of one of the toughest guys from the South Side of Chicago. Leroy Brown stood 6'4" and had a reputation of being "meaner than a junkyard dog." He was also a flashy dresser, loved his jewelry and was quite the ladies' man.

Croce sings, "Now Leroy, he a gambler / And he like his fancy clothes / And he like to wave his diamond rings / In front of everybody's nose."

At the end of the song, Leroy approaches Doris at a local bar and learns a tough "lesson about messin' with the wife of a jealous man."

Written by Croce, "Bad, Bad Leroy Brown" spent two weeks at the top of the U.S. Billboard Hot 100 chart in July of 1973. The song also netted Croce two Grammy Award nominations in the categories of Best Pop Male Vocalist and Record of the Year.

Born in South Philadelphia in 1943, Croce expressed a love for music at a young age. He played his first song, "Lady of Spain," on the accordion at the age of 5. While attending Villanova University, he performed with two singing groups, the Villanova Singers and the Villanova Spires. Croce graduated with a degree in psychology in 1965.

He joined the U.S. National Guard in 1966, and while stationed in Fort Jackson, S.C., he befriended the larger-than-life Chicagoan who would inspire his 1973 hit.

Croce struggled early in his music career, appearing at large coffee houses, on college campuses and at folk festivals. In 1972, he scored a three-record deal with ABC Records.

Later that year, he made his national debut on American Bandstand, which sparked appearances on The Tonight Show, The Dick Cavett Show, The Helen Reddy Show and The Midnight Special.

Sadly, at the peak of his fame, in September 1973, Croce perished in a plane crash near Natchitoches, La. He was 30 years old.

In a letter to his wife, Ingrid, that arrived after his death, Croce told her that he was homesick and couldn't bear the pain of being away from her and their infant son. He was planning to stop touring and to concentrate, instead, on writing short stories. It was never to be.

Please check out the video of Croce's live performance of "Bad, Bad Leroy Brown." The lyrics are below if you'd like to sing along...

Now Leroy, more than trouble
You see he stand 'bout six foot four
All the downtown ladies call him "Treetop Lover"
All the men just call him "Sir"

Now Leroy, he a gambler
And he like his fancy clothes
And he like to wave his diamond rings
In front of everybody's nose
He got a custom Continental
He got an Eldorado too
He got a 32 gun in his pocket for fun
He got a razor in his shoe