A Saskatchewan man was reunited with his long-lost wedding ring after it flew off his finger while driving down a dirt road in a small farming community in the early 1970s.

Bill Wilson blamed the loss on a spunky grasshopper that had leaped into the farmer’s work truck and landed on his chest. Wilson quickly reacted by capturing the small creature and flipping it out the window, along with his gold wedding band. He realized it was gone shortly after, but he was hauling a full load and could not turn back. 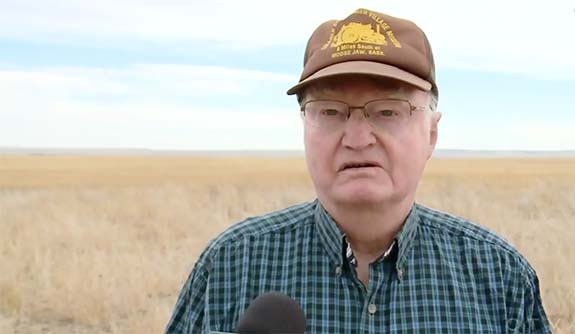 "We looked off and on for years, even bringing in a metal detector on several occasions. Every time I drove by there, I drove with my head out the window," Wilson said. He noted that if the ring landed on cultivated soil, it would be like “finding a needle in a haystack.”

More than four decades later, neighbor Carlee Goodwin was taking a walk along the very same dirt road. It had rained the day before and the bright afternoon sun reflected on something shiny that caught her eye.

“I was thinking it was a piece of metal off a tractor, but soon realized it was a ring and dug it out,” Goodwin told CTV Regina. She tried it on and noticed it was styled for a man. She wondered how and when it got there. She also wondered about the owner.

“A ring isn’t something you just throw out the window,” Goodwin told CTV Regina.

Intrigued, Goodwin called her grandmother, who suggested that the owner might be impossible to find. After all, the only building on the desolate road was a school that had been closed for nearly five decades.

Ironically, Wilson ran into Goodwin’s grandmother at a local auction. She mentioned the ring while making small talk and asked him if he knew anyone who had lost a ring in the area. Stunned, Wilson immediately said yes, noting the design and what was engraved on the inside.

The woman's mouth dropped open and her eyes widened, Wilson said. "I wish I had a picture of her face.”

Goodwin told CBC/Radio-Canada that it was surreal to find a long-lost ring, and then locate the owner.

"I didn't think I would find the owner. I was blown away," she said. "It's almost like the ring wanted to be found."

After getting the ring back, the couple stared at it in awe. The ring was missing for 45 of their 51-year marriage. In fact, most of his children have never even seen the ring.

“I was very surprised and very grateful,” Wilson said.

Interestingly, Wilson had never purchased a replacement ring. "It's a little worse for wear, but back on my finger,” he said.

Right where it belongs.