A Galveston, Texas, police officer went above and beyond the call of duty Saturday evening to help a young woman who lost her engagement ring at the beach. Not only did he drive nearly 100 miles to retrieve his own metal detector to assist in the search, but went back to the site in the wee hours of the morning even though all the other searchers had given up. At 4:36 a.m., officer Derrick Jaradi texted the woman, Jessica Haelen, with the news he had found her ring. 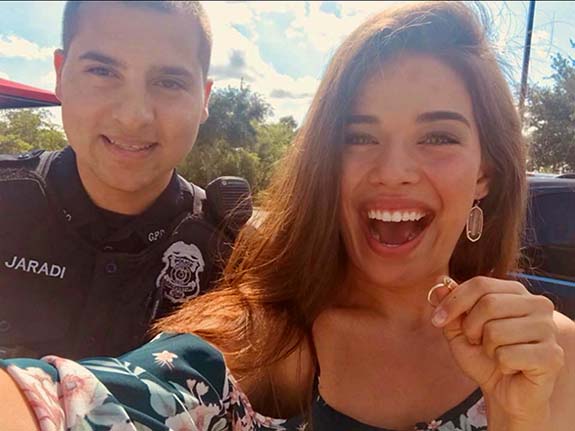 What’s even more amazing is the fact that the selfless officer had gotten engaged earlier that same day.

Saturday had been a beautiful beach day on Galveston Island. Haelen and a bunch of friends were cleaning up after a long day of sun worshipping when a friend’s car got stuck in the sand. Haelen had taken off her engagement ring and placed it in her lap while she applied hand sanitizer, but got distracted by her friend’s call for assistance.

After freeing the car, the group went out for dinner. That’s when Haelen realized the ring was no longer on her finger.

Healen, who will be taking her wedding vows on July 7, was frantic. Not only did the ring symbolize an eternal bond with her fiancé, but it also served as a lasting sentimental connection to her mom, who passed away five years ago. The ring was originally hers. 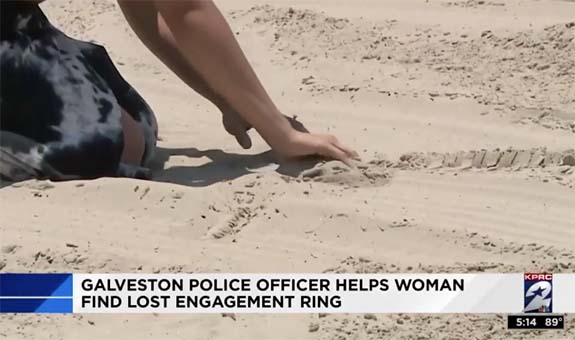 The group of friends — nine in total — hustled back to the beach and started what would become a tiring and fruitless search. It was like trying to find a needle in a haystack.

Haelen flagged down Galveston Police officer Jaradi, who immediately connected emotionally to the young woman’s plight. The officer had proposed to his fiancée earlier that day.

Jaradi told Haelen and her search party that he owned a metal detector, and that he was willing to drive home to get it. The roundtrip would cover 94 miles and take about an hour and a half. He told Haelen to text him if the searchers found the ring while he was gone.

When Jaradi returned, he handed his equipment to Haelen’s group and delivered a crash course in how to use the metal detector. 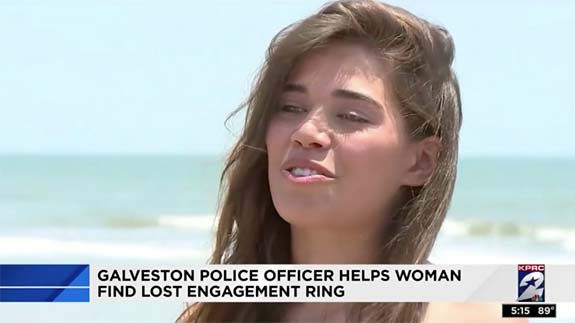 “[We} searched everywhere, every square inch of the area,” Haelen told CBS affiliate KHOU. “My heart was stopping at every little beep, because I knew it had to be there.”

Despite their best efforts, Haelen’s exhausted team called off the search at midnight and returned the detector to the officer.

Later that night, a devastated Haelen had trouble sleeping.

“I thought maybe when I lost it, it was God telling me to let go of my parents and to move on with my life,” Haelen told click2houston.com. 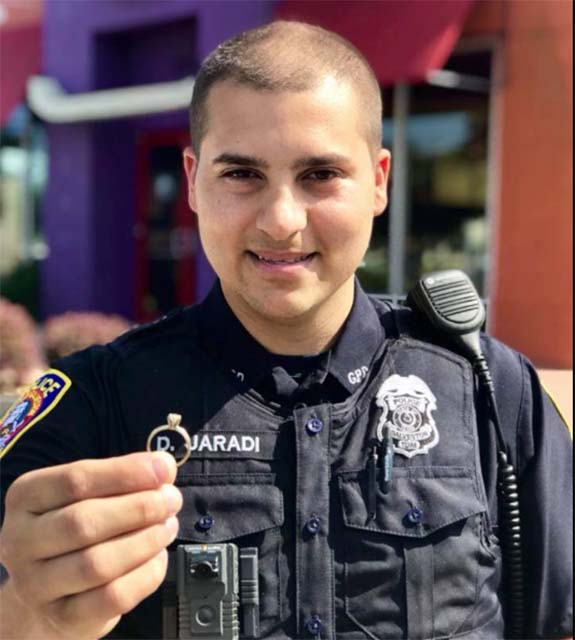 But then at 4:36 a.m., an unexpected text alert startled the young woman.

It was from Officer Jaradi and read, “I ended up getting called back to that beach at 2 a.m… You happened to wave down the one Galveston Police officer on the same day he gets engaged to find your lost engagement ring. I couldn’t get that out of my mind, so I gave it another shot between calls.”

“I was just bawling,” Haelen told KHOU. “He went above and beyond, and I definitely thank him for that.” 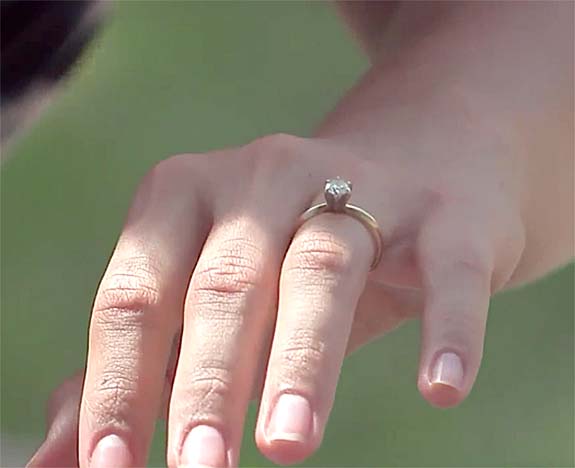 Haelen and her fiancé have extended an invitation to Officer Jaradi and his new fiancée to attend their July 7 wedding.

“No pressure,” Haelen told a TV reporter for KHOU. “I know we just met, but we shared such a special moment, and they should be a part of [the celebration].”