Welcome to a Music Friday when we bring you classic hits with jewelry, gemstones or precious metals in the title or lyrics. Today, we present Frankie Valli and The Four Seasons singing the original 1965 version of “Bye, Bye, Baby,” a tune that includes a very important line about a wedding ring. 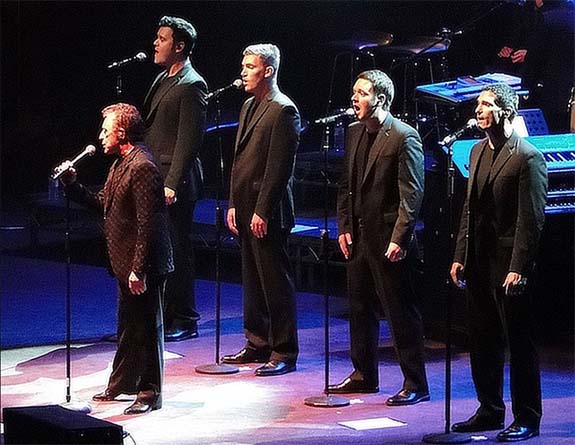 In this song, Valli tells his love interest that she’s the one girl in town that he would want to marry — except for the fact that he’s not “free.” In the last verse, we learn that he’s already married. Yikes.

The last verse goes like this: “Should have told her that I can’t linger. There’s a wedding ring on my finger. She’s got me but I’m not free. Bye bye baby, baby goodbye / Bye baby, baby bye bye.”

Written by Bob Crewe and Bob Gaudio, the keyboardist for The Four Seasons, “Bye, Bye, Baby” topped out at #12 on the U.S. Billboard Hot 100 in 1965. Ten years later, the Bay City Rollers released their version, which charted in 11 countries, Including a #1 spot in the UK. It was Britain’s top-selling single of 1975.

Trivia: “Bye, Bye, Baby” is played twice during the 2003 film Love Actually — once by Daniel (Liam Neeson) at his wife’s funeral, and again by the DJ (Junior Simpson) at the wedding reception of Juliet (Keira Knightley) and Peter (Chiwetel Ejiofor).

Born Francesco Stephen Castelluccio in Newark, N.J., Valli became the frontman for The Four Seasons in 1960. Amazingly, Valli is still touring at the age of 85. He will be appearing in Hawaii, Minnesota and Illinois in September.

With an estimated 100 million records sold, The Four Seasons is one of the best-selling musical acts of all time. The group was inducted into the Rock and Roll Hall of Fame in 1990.

We hope you enjoy the audio clip of Valli and The Four Seasons performing “Bye, Bye, Baby.” The lyrics are below if you’d like to sing along.

You’re the one girl in town I’d marry
Girl, I’d marry you now if I were free
I wish it could be

Yes I never will know you better
Wish I knew you before I met her
Gee, how good it would be for me